Last night we held our second night of the Catholicism Course, another good turn out with some new people joining the course. Last night episode focused on the Teachings of Jesus. Fr. Robert Barron highlighted the Beatitudes, the path of non-violence, what it really means to turn the other cheek and our relationship with God as presented to us in the parables that Jesus told. We journeyed with Fr Barron through parts of Poland, Germany, Spain and New York City. Looking at the true beauty of the Catholic Church through the world and the different art and culture helps to really bring the Faith alive to us and for us to see how universal the Catholic Faith is.

Last week we had the pleasure of having Bishop Elliott and Fr Alexander who were more than happy to answer questions that anyone had. Unfortunately we can't do that every week so we have found our 'Question Box' where people can post their questions each week and we will try to answer them the following week.

We look forward to next week's episode and there is still space if anyone else would like to join us. Just give Ciara an email at spes@stpatricksoho.org 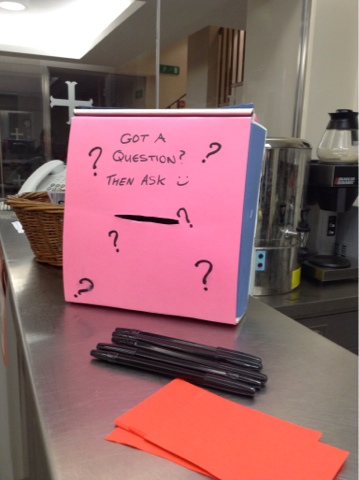 The Sound of Silence ...


We recently returned from our main SPES retreat, around half way through our year. On a cold Sunday afternoon we all packed up and headed back down to Whitstable for a week long silent retreat!

The retreat was held at the Southwark vocations centre run by Fr Stephen Langridge, and our retreat was led by Fr Richard Aladics of Leeds diocese.

The first morning we awoke to snow! And a lot of it, even the beach 5miutes down the road was covered with the white stuff. We were told how the main structure of the retreat would go; 2 conferences a day led by Fr Richard, Mass and a Holy hour and in the evenings Compline; in-between these times we were asked to remain in silence, (with the exception of meal times) we were able to go for walks down to the beach, in to the old town, read, reflect, reflect on Scripture and just be with God. ‘Who am I Lord?, Who are you?’

The silence was challenging at first, as it is something we are not used too, I often caught myself pacing around the kitchen for no apparent reason, but after the first couple of days the silence became very comforting, a great sense of peace can be found and a real self-awareness and realisation of our dependence upon God in the silence.


We all loved it!! And now are all submerged back into busy, busy London; but not without a new found sense of inner peace and knowledge that we are able to turn to God in solitude and find rest in him. 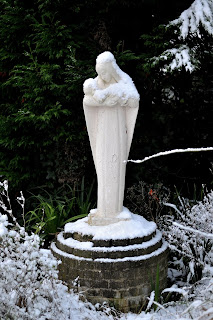 Last night we held our first session of the Catholicism Course, which appears to have been a successful night.  The evening began with a short social time and a chance to grab some soup and snacks before the actual presentation began at 7pm.  After a hymn and prayer we started the DVD of Fr Robert Barron.  In this session it was looking at 'the revelation of God become man.'  Fr Robert Barron focused on and explained the conviction of the Catholic Faith that Jesus of Nazareth is the promised Messiah.  He showed how Jesus fulfils the four tasks of the Messiah and how it is proclaimed by the Church.  Once we had watched the DVD we broke off into smaller groups where we could discuss the contents of the DVD, how it spoke to each of us where we are in our lives and work together on answering some questions, including the question that Jesus Himself asked His disciples - 'Who do you say that I am?'  We were joined by Bishop Peter Elliott, Auxiliary Bishop of Melbourne in Australia.  Bishop Elliott and Fr Alexander took some time at the end of the night to answer questions that had arose during the group discussions.

Although we have completed the first session of the course we are still allowing others to register.  So if you are interested or know someone who is please email Ciara at spes@stpatricksoho.org 
There was no rest after the Advent Mission weekend for that Monday night was our all important Open House Christmas Dinner! While we had been busy evangelising over the weekend some of our amazing Open House cooks, volunteers and friends were slaving away cooking and preparing the community centre for a Christmas party to remember.

﻿﻿
After days of preparation the day finally arrived and the community centre looked great. A real Christmas tree with loads of decorations and underneath a mountain of presents for our guests. Each guest who joined us was given a present at the end of the night consisting of some of the necessities that we all need such as hats, gloves, scarf, toiletries and some sweets or chocolate. Our guests were delighted with their presents and very thankful. 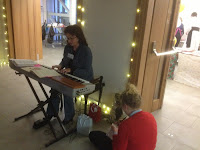 While our guests enjoyed their traditional Christmas dinner they were entertained with some beautiful Christmas carols and some chitchat with the volunteers. It was lovely to see everyone in such good spirits. I think a great night was had by all.

A community weekend of fun...or not?

It all started off well. We got up early Saturday morning, packed our picnic, wrapped ourselves up warmly and headed off Mass at Brompton Oratory. After Mass we went in the direction of the Natural History Museum. But we weren't looking to visit the actual museum, instead we were ready for some ice-skating!! For some it was their first time, for others they wished it was there last, lol. Surprisingly some who were not so keen took to it quite quickly and for first timers they were doing well. Others, well one in particular, hung tightly to the sides of the ice-rink before quickly exiting half way through the session. Oh well, I do believe they still had some fun. Amazingly not one of us fell! Well not physically; this is the point in the weekend where one by one the students began to drop!

Firstly Ola left us after ice-skating to go home to bed feeling and, sorry to say it, looking sick. The rest of us had our picnic and then went for a look around Science Museum. There were some nice and interesting displays there. In the evening we went back to St Patrick's to play on the Wii. This is where student number 2 dropped. Terry began to not feel so great. After some Adoration and street evangelisation we all headed off home.

Saturday had been Fr Alex's birthday but since we had not seen him we celebrated his birthday on the Sunday. It was a nice day and we were joined by a few others;except our two sick students. Although now that number was increasing Alfonso didn't feel so good and had to have some sleep. That left just Ben standing - but not for long! By the end of the day Ben was also not so good. In the evening we went to see The Hobbit. Ben and Alfonso were just about fit to go. Laurie, Ciara and the two Australian seminarians joined them. The film was good, although a little dragged out at the beginning.

Since now all the students were sick the plans for Monday were cancelled and instead Laurie took those who were well enough down to the National Gallery to look at some art work associated with The Birth of Jesus.

After this it was pack up and get ready for our Christmas break, and hopefully recover from all the sickness!!
Posted by St Patrick's Soho at 11:21 pm 0 comments

Our Advent Mission took place over the weekend of Friday 7th - Sunday 9th December.  There was a lot of preparation beforehand but it was all well worth it.


On the Friday night we went out into the streets to speak to people and to remind them what Advent is all about.  While we were out evangelising others were in the Church praying in front of the Blessed Sacrament for us and those we would speak to.  At the end of the evening we all prayed for those we had met and their intentions before Our Lord in the Blessed Sacrament.

Saturday was a long day but we all very much enjoyed it.  In the afternoon we had Adoration in the Church with beautiful music (thanks to the NightFever crew) while outside we set up two tables, one for the all important hot chocolate and mince pies and the other with some interesting and informative flyers and a box in which people could write their prayer intentions if they wished.  We had prepared some small gift bags to give to those we met and spoke to.  The gift bags have a Scripture quote, miraculous medal with explanation and a sweet.

Saturday night was our latest NightFever, an absolutely brilliant night as always!  For nore info see our previous post :)

Sunday afternoon ran pretty much the same as Saturday except we were based at Notre Dame de France, the French Church at Leicester Square.  There we had lovely music on the steps of the Church.  Then at 6pm we were back at St Patrick's for the International Mass for the Solemnity of the Immaculate Conception.  This is a Mass that brings together the different communities who celebrate Mass at St Patrick's every week.  After the Mass we processed from St Patrick's to Notre Dame de France with a beautiful statue of Our Lady while we also sang and prayed. 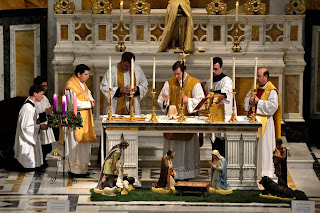 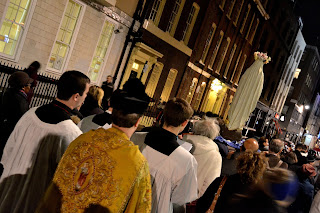 Well in answer to the blog post title we have been plenty of places and doing plenty of things - except updating our blog!  Oops, sorry about that.  Now we shall fix that and bring you up to speed with all our goings on.  Hopefully over the next week we will get you all updated and back on track.

Before Christmas we had our Advent Mission, the Open House Christmas Dinner, some community days out and a bit of fun.  We were off for 2 weeks over Christmas, much needed time for rest and relaxation.  We came back after Christmas refreshed and ready to go again - which is good since we haven't stopped since!!

Since Christmas we have had our Parish Christmas dinner, cookathon, our second assignment, and now a retreat.  Busy busy.  In the next few posts we will update about some of these events with some pictures also.

St Patrick's Evangelisation School (SPES) is a 9-month course forming young adults in the Catholic faith. We are based in the centre of London, England, in Soho - an area poor in spirit. The young people based here in the parish bring hope to the surrounding community by the many different ministries we are engaged with, including outreach on the streets and on our front door step.
The prayer life, outreach, catechesis and evangelisation is, by the grace of the Holy Spirit, thriving here, and this blog can help keep you up to date on everything that's going on. So stay tuned and subscribe!!